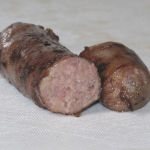 Not the usual...and we like the unusual...so bring on the goat sausage...

We'd picked up a pack of Chestnut Meats Gluten Free Goat Sausage in our travels, probably at a farm shop, but I cannot for the life of me recall from where exactly...but that fact aside...we thought we would give them a go even with a few reservations from one of the younger team members.

The labelling and web site advise that they are gluten free, and low in fat, plus also being low in cholesterol.  Healthy stuff then it would appear...

86% goat, reared and butchered in the UK.

These goat sausages first off, are in collagen cases (rather than natural skins) which isn't something I'm personally fond of, and having had differing results when cooking such, we pan fried half the pack, and grilled the remainder.

The pan fried samples all ruptured and split badly.  The cases became particularly soft and the contents became really wet taking up the oil in the pan. The grilled samples however faired better and held nicely together.  Perhaps grilling (or oven baking) is the best way to go with these we'd recommend.

The texture of the samples did vary but were all on the soft and loose side of what we would normally expect in a sausage.  Taste-wise quite meaty, but sadly there was not much seasoning to be honest.

Eaten cold, not bad but the sausage texture was still quite soft and although tasted OK, they wouldn't be something we would purchase again. 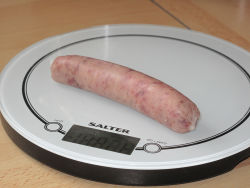