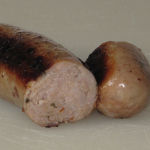 Many may have missed the Dragon's Den programme on the TV where the Turners successfully pitched for some financial assistance to develop their business and Peter Jones joined them in the sausage business?  Well when I saw these sausages in our local store, I was intrigued.

Traditionally shop made sausages are a thing to behold but let's consider this, the Turner's wanted to develop to supply thousands of units to Tesco nationally. Realistically they'll not be able to do this from a butchers shop in Aldershot.  I read from their web site that the Turners were careful in their selection of a suitable partner factory and were very careful to make sure that their partners were able to duplicate the process that the Turners were taught and to match the quality that had won the business so many awards".

The Best of British sausage is a traditional pork sausage that has won multiple regional and national awards including the National Branded Sausage of the Year so the web site says, so we thought we'd give them a go and see.  Mind you we bought them from Sainsbury's...didn't see them in Tesco.  We'll look again though...

80% pork with some rusk filled into natural pork casings certainly sounds good. Well let's not beat about the bush!  For a factory sausage, these were, pretty good!

Cooked up the skins browned well, tightened down and held together without any splits or spits. The skins were far from rubbery (which we did expect from a factory sausage) and when cut were crisp enough.  No shrinkage at all, which we found unusual to say the least and low-ish weight loss.  The texture we found was just under medium, making for a good chew.  Reasonable succulence too.

Taste-wise they were very much OK.  A tad more seasoning we thought would benefit though.  You may find that there's enough for yourselves, but for us we'd like a bit more.

We noted that on our sample pack the skins had a few "veins". Better quality skins don't tend to have these.  I've subsequently checked other packs and the skins were clear, so perhaps we were just unlucky in our choice of testing sample. Presentation to us is important.

We support Help for Heroes which the Turner's are also supporting.  We bought a couple of further packs.  Come on, every little helps.

A very good everyday sausage at a VERY reasonable price in our opinion, and we are sure you'll like these.

Would we buy again?  Absolutely...barbeque time is here! 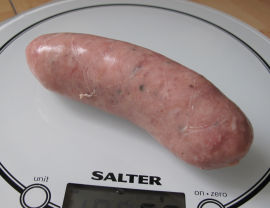 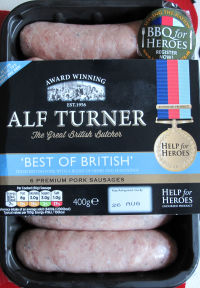